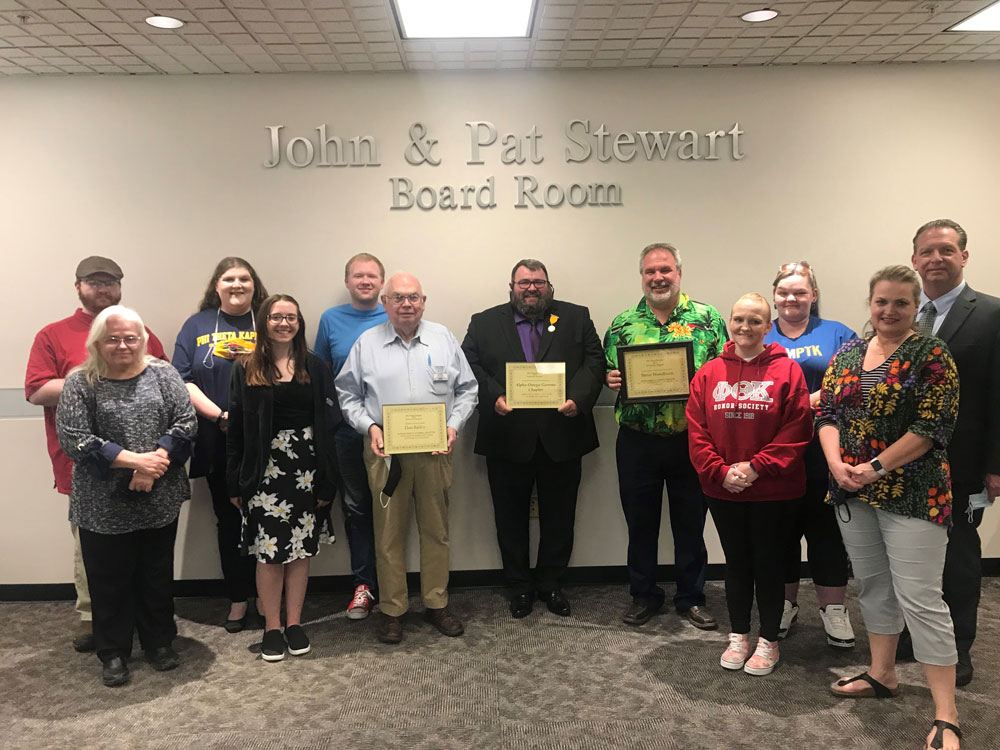 PTK recognizes the academic achievement of college students and provides opportunities for its members to grow as scholars and leaders. Established in 1918, Phi Theta Kappa has a presence on almost 1,300 community college campuses in all 50 of the United States and 10 foreign countries.

“I began advising PTK last fall and I was just blown away by the initiative of these current members,” said Janet Thompson. “They're so eager to get involved. Their dedication and thoroughness are both amazing and inspiring.”

As their college project, PTK members chose to complete promotional activities for the 2020 Census in hopes of increasing the number of people locally, particularly their peers, who completed the Census.

“The project that they chose, which was very timely in that it was the year of the Census, was something that of value to both the college, the community and to them as individuals,” said PTK advisor Dan Bailey, who has been an advisor with the organization since the ACTC chapter was chartered in 1994.

“There are 22 chapters in the Kentucky region, so to be second runner up, I think is significant,” he added.

Steve Woodburn, Chief Student Affairs Officer, said he was very impressed by the willingness of PTK members to participate in this project and was proud of their success.

“Winning these types of awards is impressive regardless of what year you do it in. However, it really shows the character of our PTK leadership and students and how important it is for them to be engaged when they were able to win this award during the pandemic,” said Woodburn. “It's been really hard to try to maintain any normalcy, but these students stepped forward and did it in spite of the pandemic.”

Woodburn was the recipient of the Distinguished Administrator Award for his support of PTK activities on campus.

“I am honored. I feel like I try to do whatever I can to assist the students, so it’s a real honor for me to be looked at as someone deserving this award,” Woodburn said.

Bailey was the recipient of the Horizon Advisor Award, an award he has received numerous times since the chapter was chartered.

“It's an honor to receive the Horizon Award on behalf of our ACTC chapter and the Kentucky region,” he said.

“Through the ups and downs, Dan has always been focused on PTK, and it's about the students for him. It's not about the organization, it’s not about awards…those are the fun things that happen. But it's really about him serving the students and working with students. And he has a great heart for that,” said Woodburn.

“I feel very lucky to get to learn from somebody like Dan that's so experienced and knowledgeable,” she said. “I am still new to PTK, and Dan is very supportive and we've had a blast this year so far. I am also grateful for Steve Woodburn’s support. He’s always open to work with us and we're lucky to have somebody like Dan and Steve to support our organization.”